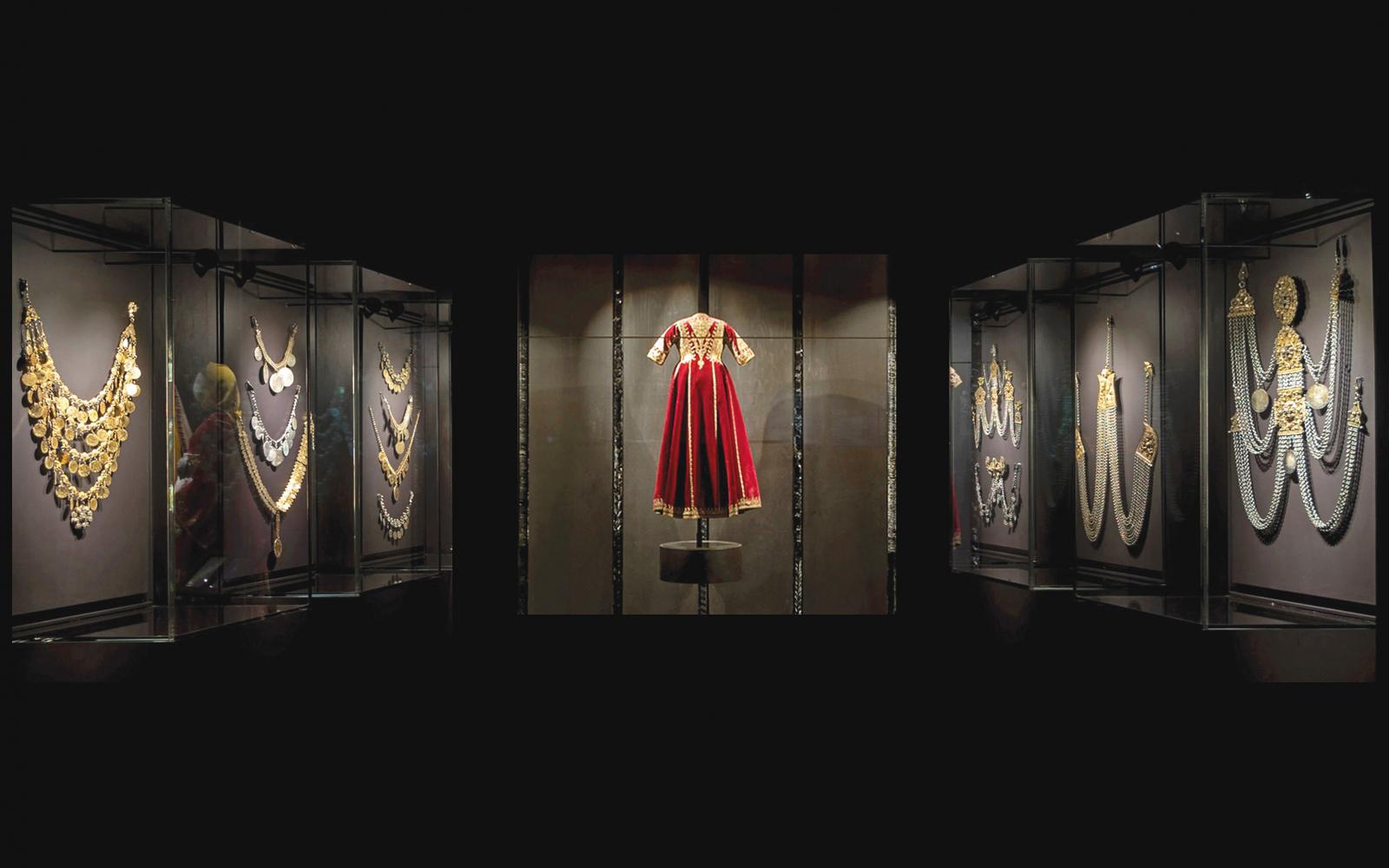 In the centre of the Old Town of Kalamata, a neoclassical building houses one of the most extensive collections of Greek costumes and jewellery from the mid-18th to early 20th century. Behind this extraordinary museum are Mrs Victoria Karelia and her decades-long passion for collecting local folk dress to preserve its culture and heritage.

When did you first come into contact with traditional Greek costume? What were your initial feelings and thoughts?

When I was young, I handled a Kontogouni (short coat) with gold embroidery. A family heirloom, its image engraved itself deep inside of me. This elegant and luxurious garment was the subconscious beginning of my interest in traditional Greek costume. The first complete costume I acquired was from the Diocese of Naoussa. It moved me because the embroidery design on the shirt was similar to Byzantine imperial costumes, as if from a period mosaic.

When did you start collecting, and how did it come together?

As a founding member, later president and curator of the Kalamata Lyceum Club of Greek Women, I have been involved in traditional costume from a young age. I learned a lot from experts I met: Popi Zora, Yannis Tsarouchis, Ioanna Papantoniou and others. About fifty years ago, the collecting bug bit me. In the beginning, I bought costumes from well-known antique dealers such as George Goutis, Dimitris Zoumas and the Giannoukou family. When word spread that I was collecting, several people approached me to sell costumes they owned. That is how my collection grew to become what it is today.

What drove the creation of the museum exhibiting your collection in Kalamata?

For many years, my collection was in boxes at home in my storage room. That tortured me. I couldn’t accept not sharing them with the world, keeping the privilege of admiring their beauty to myself. In my estimation, the driving force behind the museum was my need to communicate my love and admiration for traditional Greek costumes and to share that heritage with the world.

Take us on a little tour of what comprises the museum’s exhibition.

The exhibition includes about 80 complete costumes, both men’s and women’s, as well as some gold-embroidered overcoats and pieces of jewellery from all over Greece. As for their presentation, the exhibit follows the typology of prominent scholar Angeliki Hadjimichali. Accordingly, there are three categories of classification; costumes with Segouni (thick-woollen coats), Kavadi (long garments) and frock coats. These categories are on exhibit on three floors, respectively. They begin on the ground floor and move upwards. The exhibits connect via a three-storey moving showcase, suggesting their continuity with the people who wore them.

Why is it important for people to know the folk traditions of their country?

Being familiar with the folk traditions of your homeland communicates subtle wisdom with your subconscious, keeping it alive. People’s traditions are neither superstitions nor the disguised science of an earlier age. They contain universal truths that have to do with the way humanity perceives the world and connects with it.

The museum has folk costumes from all over Greece. Which are most imressive – those that move you most?

In the early years, I was impressed by gold embroidery and urban garments of the early 20th century. Their beauty is more eloquent and closer to my experience. I slowly came to appreciate embroidered fabrics and wool, partly because I was moved by those who made clothes with an instinct for elegance and colour combinations. So, I would say that I prefer the traditional costumes of nomadic populations –Sarakatsani, Vlachs and others– maybe because I have Vlach ancestry on my father’s side. However, every Greek costume has something that makes it unique. I can’t choose.

What do you see when you look at a traditional Greek costume?

Primarily, I am impressed by the cut and fit on the female torso and the unexpected combinations of textures and colours. At the Lyceum, women who wear these costumes become majestic. I often wonder how it was possible for people living in remote areas at the end of the 19th and beginning of the 20th century to have such a sense of style.

You remarked, “The people who made and wore these costumes did not have our knowledge or resources, but their inner world was more ordered than ours.” What did you mean by that?

These people were grounded and lived their lives in traditional, earthly ways. Life, seasons, holidays, customs, songs and dance were not random. People were attuned to the world and its rhythms and respected the laws of nature and social coexistence. These days, we have lost touch with that. Our lives are overly complicated. We destroy the environment, despise our fellow humans, and suffer loneliness and alienation.

What things can a costume reveal?

The costume is indicative of social status depending on the quality of the material, the fine details and the accessory jewellery. It reveals a woman’s financial and marital status, if she has children, is a widow, depending on how she wears it and where she comes from depending on the costume and its details. There are subtle details such as symbols of fertility and protection: the evil eye, for example. In general, the costume is a visual code of communication and identification.

How are folk traditions important to younger generations?

Through familiarity with tradition, younger generations acquire a sense of origin, place, time and history. Primarily, this sense of self-respect helps ground them firmly on their own two feet to face life's challenges with patience and strength.