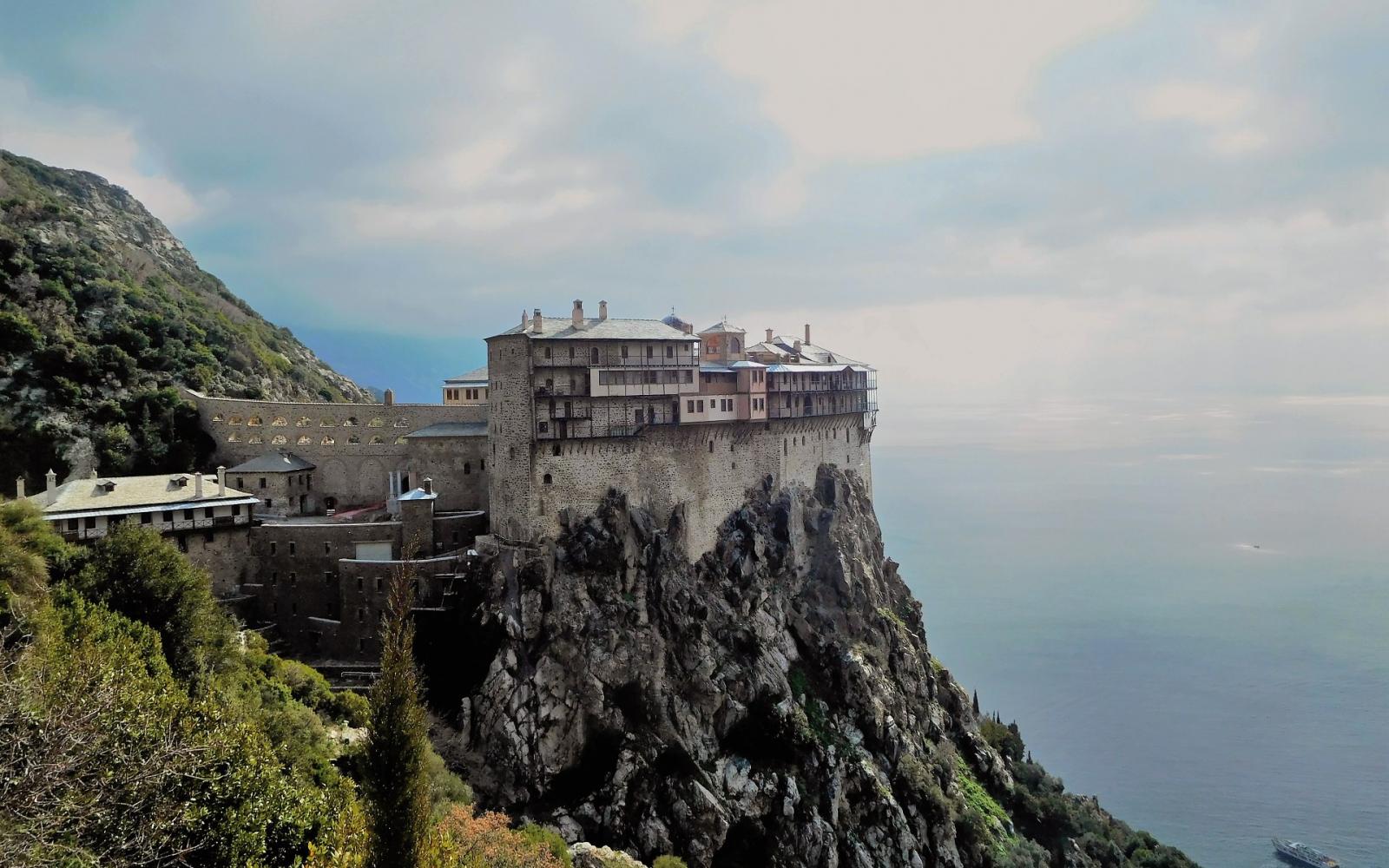 It’s seven o’clock in the morning, and although it’s still dark, Ouranoupoli is already awake. The journey to the ferry takes two hours from Thessaloniki. The switchback roads in Halkidiki are nearly deserted, and you can’t help but feel the weight of isolation. You don’t need much for your trip to Mount Athos – a change of clothing, a ticket for the ferry boat, and the permit securing your entry into this incredible place. The boat departs at 09:45 am, her deck a sea of faces from around the world. Those who have been before look more at ease. Those who haven’t have faces dripping with anticipation. Some seek answers to personal impasses. Others seek an escape from everyday life. Some go for scientific research, some for tourism and many for pilgrimage. The boat arrives in Daphne, the port of Mount Athos, at 12:00. From there, some board a smaller boat headed for the monasteries on the southwest side, while most take the bus that leads to the capital, Karyes, and to the monasteries on the east side. Although small vans transport visitors to the monasteries for a small fee, the best way to experience Mount Athos is to hike, which many people see as a right of passage.

Mount Athos and the natural landscape have a mesmerising and mythical quality. The mountain exceeds 2,000 metres and has an impressive marble peak that is usually covered in snow. In most places the vegetation is dense with chestnut, beech, holly, arbutus and cypress trees. Rare native herbs grow everywhere. Deer, wild boar, nightingales, eagles, hawks, herons, European jackals, cormorants, owls, hummingbirds, and foxes all live in the area. Their familiarity with humans is simply otherworldly. Today, Mount Athos is home to 20 monasteries and about 1,500 monks. Though most are Greek, there are some Serbian, Russian and Bulgarian monks as well. Each monastic community is unique in its own way. They all have their own history, their own people and their own special light.

Here, hospitality is treated as a spiritual virtue of both man and God. Guests have the opportunity to view incredible religious heirlooms, participate in the evening’s activities, initiate deep conversations with the resident monks, and learn about the viticulture and farming of the region, as well as meet interesting people from around the world. On Mount Athos, time is measured according to the Byzantine method wherein the day begins at 0:00:00. The food offered in the common dining halls is simple – an omelette with vegetables, bread, feta cheese, grapes and wine. Eating meat is prohibited, but fish is allowed. It’s forbidden to talk while eating. Sleep rarely exceeds six consecutive hours. One’s passions are soothed by fatigue, a concept which the visitor must embrace if they want to effectively integrate into the monastic life. Indeed, Mount Athos is not for everyone. It’s a commitment to live according to their rules.